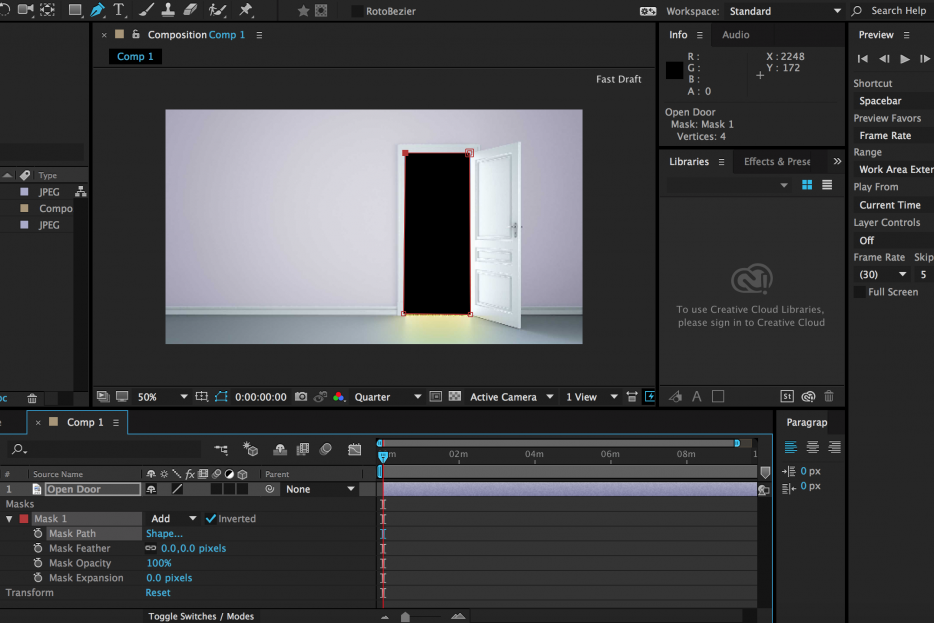 Alpha Mattes and Masks are useful tools in After Effects, and in this tutorial we’ll look at how to create them and a few ways they can be used.

Let’s say I’m starting out with an image of an open door, and an image of Tahiti (alpha mattes and masks can also be used with footage too, so what we do here can be done with film as well). Now, I want Tahiti to be on the other side of that door instead of the meadow that’s already there. So we need to bring them into After Effects to start. Create your new composition (I named mine Comp 1) and import the files using “command + I”. Then drag the image in which you want to cut a hole onto the timeline for Comp 1. Using the pen tool, highlighted in blue on the top of my screen, I created a mask by tracing over the part of the picture I want to isolate. It’ll look like this once you’ve completed the shape: Now I’ve opened up the Masks tab, then my Mask 1 tab to see all of the settings I can mess around with for this mask. Right now, the thing I want to focus on is that it says “Inverted” to the right of the Mask 1 tab. Let’s click on that box to the left of “Inverted”. Now we can see that the door is blank. Now we’re going to drag and drop the picture of Tahiti onto the timeline. It should be placed underneath our door layer so it shows up below the room layer. Let’s scale our Tahiti picture so it fits in the doorway. Oh gosh, it’s really blurry, but that’s because it was originally a small picture. Aside from that, the composition should be finished. You can use masks like this in a variety of ways. This is just one, very simple example of how to get started. You can play around with the different settings of your masks to get good effects for your film or project. This trick is usually how films can get the same actor to talk to themselves while in the same room. Play around with it, and have fun with your masks.